In order to increase the efficiency and to reduce the thermal effect of metal heating, the induction brazing technology is proposed. Advantage of this technology consists mainly in exact location of heating supplied to the brazed joints. Based on the results of numerical simulation it was then possible to design the parameters necessary to achieve brazing temperatures in the desired time. The aim was to minimize this time to avoid an undesired thermal effect on the metals during metallurgical joining.The results of numerical simulation revealed that increasing the current frequency resulted in concentration of maximum temperatures in surface areas of joined metals. With increasing current, the reduction of time required for reaching the brazing temperature was observed.

The advantages of induction brazing of aluminum vs. torch or flame brazing

The low melting temperature of aluminum base metals coupled with the narrow temperature process window of the braze alloys used is a challenge when torch brazing.  The lack of color change while heating aluminum does not provide braze operators any visual indication that the aluminum has reached the proper brazing temperature.  Braze operators introduce a number of variables when torch brazing.  Among these include torch settings and flame type; distance from torch to parts being brazed; location of flame relative to parts being joined; and more.

Reasons to consider using induction heating when brazing aluminum include:

Successful induction brazing of aluminum components is highly dependent on designing induction heating coils to focus the electromagnetic heat energy into the areas to be brazed and to heat them uniformly so that the braze alloy melts and flows properly.  Improperly designed induction coils can result in some areas being overheated and other areas not receiving enough heat energy resulting in an incomplete braze joint. 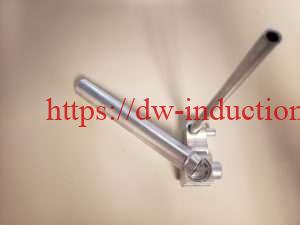 For a typical brazed aluminum tube joint, an operator installs an aluminum braze ring, often containing flux, on the aluminum tube and inserts this into another expanded tube or a block fitting.  The parts are then placed into an induction coil and heated.  In a normal process, the braze filler metals melt and flow into the joint interface due to capillary action.

First, a little background on common aluminum alloys prevalent today and the common aluminum braze and solders used for joining.  Brazing aluminum components is much more challenging than brazing copper components.  Copper melts at 1980°F (1083°C) and it changes color as it is heated.  Aluminum alloys often used in HVAC systems start to melt at approximately 1190°F (643°C) and do not provide any visual cues, such as color changes, as it heats.

Another phenomenon when aluminum is brazed with a zinc alloy is pitting. Local cell or pitting corrosion can occur on any metal. Aluminum is normally protected by a hard, thin film that forms at the surface when they are exposed to oxygen (aluminum oxide) but when a flux removes this protective oxide layer, dissolution of the aluminum can occur.  The longer the filler metal remains molten, the more severe the dissolution is.

Aluminum forms a tough oxide layer during brazing, so the use of flux is essential. Fluxing aluminum components can be done separately prior to brazing or an aluminum brazing alloy containing flux can be incorporated into the brazing process. Depending upon the type of flux used (corrosive vs. non-corrosive), an additional step may be required if the flux residue must be removed after brazing.  Consult with a braze and flux manufacturer to get recommendations on brazing alloy and flux based on the materials being joined and the expected brazing temperatures.