What is Induction Bending?

An induction bending pipe/tube machine is sketched in the photo. After positioning the pipe and securely clamping its ends, power is applied to a solenoid-type inductor that provides circumferential heating of the pipe in the area where it will be bent. When a temperature distribution that provides sufficient ductility to the metal at the region of bending has been attained, the pipe is then pushed through the coil at a certain speed. The pipe’s leading end, which is clamped to the bending arm, is subjected to a bending moment. The bending arm can pivot up to 180°.
In induction bending of carbon steel pipe, the length of the heated band usually is 25 to 50 mm (1 to 2 in.), with a required bending temperature in the 800 to 1080°C (1470 to 1975°F) range. As pipe passes through the inductor, it bends within the hot, ductile region by an amount dictated by the radius of the bending arm pivot, while each end of the heated region is supported by a cold, nonductile section of pipe. Depending upon the application,
bending speed can range from 13 to 150 mm/min (0.5 to 6 in./min). In some applications where larger radii are required, a set of rolls is used to provide the required bending force instead of a bending arm pivot.After the bending operation, the pipe is cooled to ambient temperature using a water spray, forced air, or natural cooling in air. A stress relief or temper can then be conducted to obtain required post-bend properties. Wall thinning: Induction heating provides rapid circumferential heating of selected areas of the pipe, consuming a minimum amount of energy compared with other hot bending processes in which the entire pipe is heated. There also are other important benefits provided by induction tube bending. These include highly predictable shape distortion (ovality) and wall thinning. Minimization and predictability of wall thinning are particularly critical when producing tubes and pipes for applications that must meet high-pressure requirements,such as nuclear power and oil/gas pipelines. For example, oil and gas pipeline ratings are based on wall thickness. During bending, the outer side of the bend is in tension and has a reduced cross section, while the inner side is in compression. When conventional heating is used in bending, the cross section of the outer side of the bend area often is reduced by 20% or more resulting in a corresponding reduction of the total pipeline pressure rating.The pipe bend becomes the pipeline’s pressure-limiting factor.
With induction heating, the reduction in cross section is reduced to typically 11% due to very even heating, an optimized bending program via a computerized bending machine, and a narrow plasticized (ductile) zone. Consequently, induction heating not only reduces production costs and increases bend quality, but also reduces total pipeline cost.
Other important advantages of induction bending: it is not labor intensive, it has little effect on surface finish, and it has the ability to make small radii, which enables bending of thinwall tubes and the production of multiradius curves/multiple bends in one pipe. 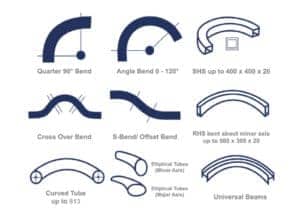 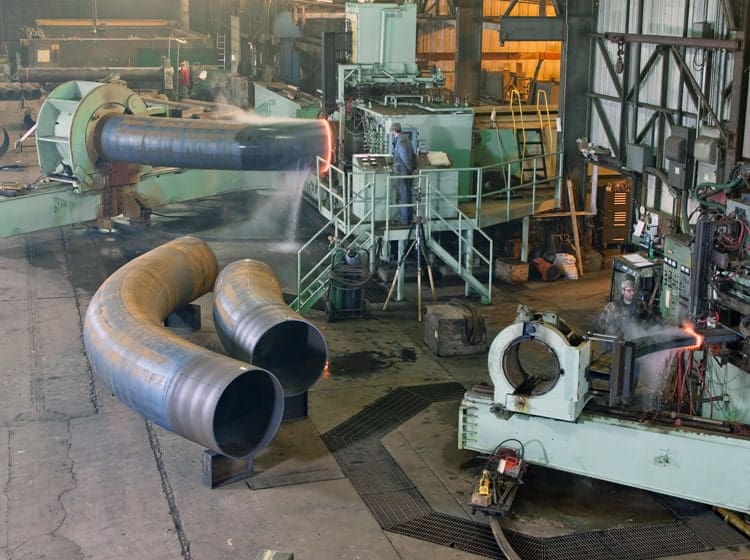